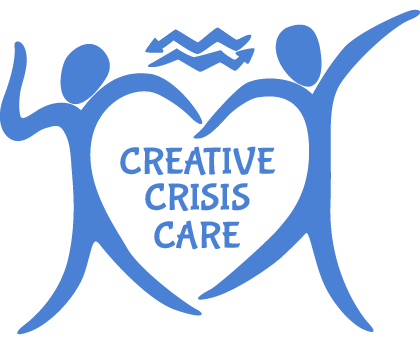 Having a crisis? Nothing a little compassionate creativity can’t handle! Creative Crisis Care is committed to choosing life in the midst of the most debilitating hopelessness. In Latin, ‘crisis’ refers to the moment where weakness pushes one to change.

“Perhaps the purpose of crisis, if there is one, is not to break us as much as to break us open (Mark Nepo)”.

We believe that there is always a way to move from thoughts of suicide and hopeless depression to recognition of a life that is meant to be…that all lives are meant to be.

What is this troubling condition that claims more lives than accidents, homicides and war combined? Is suicide the result of mental illness? After all, studies have shown that 90% of completed suicides occur in people who have some kind of mental health diagnosis. Or do the roots of this issue go deeper than that? Is suicide perhaps some kind of spiritual calling…a very deep call for love that can best be answered by sensitive and strong hearts?

The work of Creative Crisis Care is to find the roots of these tenacious weeds that grab hold of the mind and dig them up safely and tenderly. Once the suicidal person can identify their own compulsive stories, we can begin the journey into the feelings behind the stories.

By using many forms of the arts, experiential games and creative role playing, participants are able to witness the mechanisms that hold them in suicidal ideation and behavior…what Suicide Anonymous refers to as an addiction. The power of the arts lies in the fact that they address cognitive as well as emotional issues.

In a world that hides behind screen time technology, people (particularly our youth) are seeking immediate responses to problems that have usually taken quite a while to develop. Creative Crisis Care is about slowing down the process long enough to pull apart the entangled thoughts and place them in front of us for study. Next we begin discerning between what is FACT, BELIEF, and FEELINGS.

For too long we have had an approach/avoidance tendency with this topic. We are not particularly wired to see the signs and risks, perhaps not really wanting to see them (yes, it’s frightening and awkward). Diminished spiritual values could be the current plague that makes giving up’ seem so easy.

This creates an opening for bullying that occurs at all ages. Bullying is not a rite of passage. It is a sickness that needs a tremendous amount of attention, not just an annual day long presentation or even a week- long event at a school, just as suicide is not usually treated with one or two hospital visits.

Since the early 80’s, then known as Creative Communication Builders, we have been creating and facilitating workshops that have brought tremendous healing to many people struggling with these problems, turning them into solutions…bringing us from suicide to celebration (as was first quoted by its now deceased co-founder Phillip Garber)…supporting people in finding their own answers.

The success of this work is primarily due to the fact that its founders have lived experience and currently work as peer counselors, treating others struggling with these issues. They are trained as peers and have completed training in suicide prevention. They have had a long history of studying and performing various art forms from mime to dance to writing. They also have been involved in groups that use creative role playing to evoke emotions and have adapted these to fit the needs of their mental health clients.